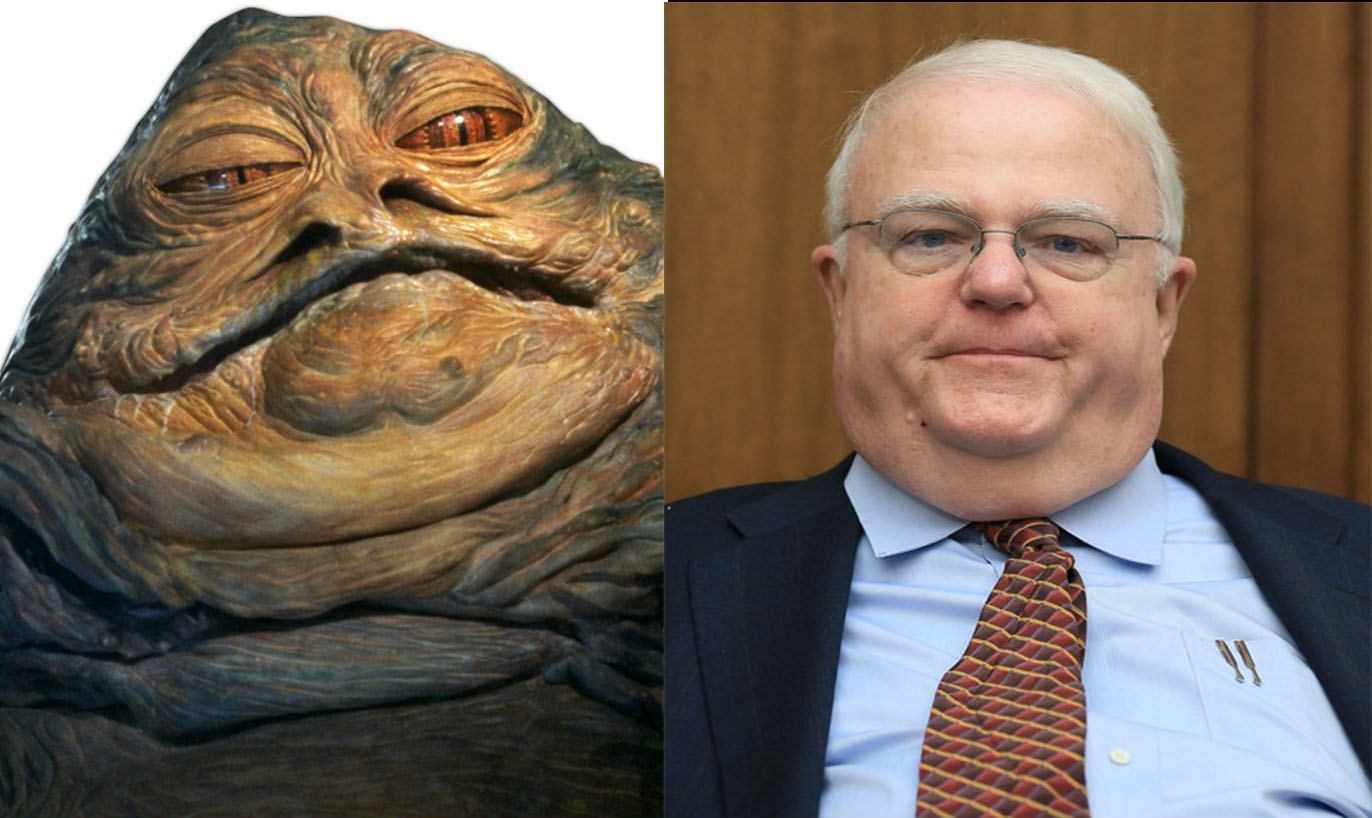 Anyone who expected Jim Sensenbrenner to be intimidated by the substantial turn-out at his Town Hall meetings last Saturday was in for a disappointment. Sensenbrenner is nothing like those other Republican congressmen who actually ran away from their angry constituents.  He’s used to facing down — and cutting off — Democrats and progressives, though not in such large numbers.  Unlike his morning Town Hall in Fort Atkinson, which was reportedly angry and fractious, the Pewaukee crowd was calm and relatively civil.  We’re nice people out here in Waukesha County.

The meeting at PPL was exceptional.  The last time I attended a Sensenbrenner town hall, back in June in Elm Grove, the congressman presided along with Republican State Senator Leah Vukmir, who is afraid of the voters and refuses to meet with them unless she’s got a tough guy by her side, and Jabba (my nickname for my congressman, and a lot easier to write than “Sensenbrenner,” though a lot of people I know just call him “Senseless” or “NoSense”) is tough as an old boot.  The attendance at that June town hall was far more typical and consisted of half a dozen worshipful Republican voters and me, and I got roughed up a little bit, cut off, not allowed to ask a follow-up, the usual Jabba shtick.

This time, it was Jabba who got roughed up by those allowed inside the room.  The overflow packed the halls at the library, with people, like me, clustered around phones watching the live stream on CNN.  You had to have showed up an hour early to get one of the seventy-five seats in the meeting room, but there was standing room and people lined the walls.  Angry, but polite, people.

Jabba tried to mollify the crowd on the Obamacare repeal issue by insisting there would be a replacement.  I get his newsletters, and I know he was spewing the same poison about Obamacare costing “thousands of jobs” that Donald Trump and Paul Ryan are so fond of — with no substantiation whatsoever.  But now that Republicans have gotten wind of the fact that individual people who don’t have access to employer-provided insurance actually like being able to go to the doctor, they have taken up the cause of replacement.  This in itself is irksome, since the ACA was essentially the government insurance program the Republicans wanted.  Most Democrats wanted single-payer (i.e., wholly government funded).  But even an essentially self-funded program got unpopular once the Tea Party — with its motto of “government sucks” — gained control of the GOP.  The mantra “Obamacare cost thousands of jobs” is no doubt what fuels the Republican mania for replacement.  But because the Republican voter base is essentially a band of true believers, no effort was ever made to prove that this was the case, nor was any required as far as GOP politicians were concerned.   Republicans have an invincible belief that anything that Barack Obama touched has to be bad.  The fact that the ACA ain’t broke (though it may need some fixes), and no sane political party would even be talking about replacing it, does not enter into the equation.

So Jabba continued with his new bald-faced lie — that the Republicans are in the process of coming up with a replacement for Obamacare.  He swore he would not vote for repeal without replacement.  He actually said that.  But Democrats are not as dumb as Jabba’s conservative true believers.  A man standing near the door asked, “How many times did you vote to repeal Obamacare without a replacement?  A dozen?”

Of course, Jabba did not deign to answer that question, simply pounded with his gavel and ordered the questioner to maintain civility.  (“Civility” at a Sensenbrenner meeting means no spontaneous questions.  You fill out a piece of paper ahead of time, and if he calls on you, fine, if not, tough luck.)

A woman asked why Jabba is so adamant about de-funding Planned Parenthood when women rely on it for reproductive healthcare.  What he said next made me wonder what I so often do about Republicans — are they consciously lying or do they just not know any better?  Jabba said Planned Parenthood is not necessary because there are hundreds of community health organizations standing at the ready to do Planned Parenthood’s job.

What!  Was he talking about, for example, the 16th Street Clinic — one community health organization for half the damn city of Milwaukee that does not have the resources to do women’s healthcare?  Or was he talking about the religious-funded pregnancy clinics, which style themselves as women’s health clinics?  The sole service they provide is the free pregnancy test.  No annual exam.  No pap smears.  No birth control.   And if a woman does turn out to be pregnant, know what they do?  Hand her a cute pair of baby booties one of their volunteers has knitted and say, “Congrats.”  Only they don’t mean “Congrats.”  They mean, “See what you got yourself into, you filthy slut?”

More falsehoods followed when the discussion turned to environmental issues and the planned — and highly anticipated — gutting of the EPA by its new administrator, Scott Pruitt.  When asked about how the Republican-dominated government plans to go about addressing the issue of climate change, Jabba actually trotted out that pathetic GOP fallacy about how there is scientific disagreement on the issue.  When that didn’t fly, he tried the Koch-brothers’ new-and-improved line about how, sure, the planet is warming, but you can’t actually prove that human activity is doing it.  When that failed to impress the assembled citizens, Jabba just fell back on the idea that Cap & Trade isn’t going to work.

His final ploy was easily the silliest.  He said, Besides, you really don’t expect China to keep up their end of the Paris Agreement, do you?  Why, such an expectation would be laughable.  And as if to prove just how laughable, he said, “The air in Los Angeles is a lot cleaner than the air in Beijing.”

Now you know why they call him “Senseless.”  I mean, just as a starting point, California is a blue state with some of the toughest environmental regulations in the U.S.

When Jabba’s questioners began to grow restless, as though they really did expect him and his party to do something about pressing national problems whether they feel like it or not, he reminded those assembled of one very important fact, the only fact he seemed to have a good handle on: “I won re-election by 146,000 votes.”

James Sensenbrenner has been a member of the United States House of Representatives since 1979.  Yes, friends, for thirty-eight years.  You can’t blame him for thinking that he’s doing what his constituents want him to do.  But I do anyway.  Because Republican policy initiatives on healthcare, women’s health, and the environment are reactionary and wrong-headed.  Morally wrong, wrong for the future of our country and our planet, and therefore economically wrong.

Even the Koch brothers won’t be able to make a dime if we’re all dead.  Though they are no doubt preparing to survive in some deluxe, climate-controlled dome while the rest of us fry.  Wouldn’t put it past them.  Or their minion, James “Jabba” Sensenbrenner. 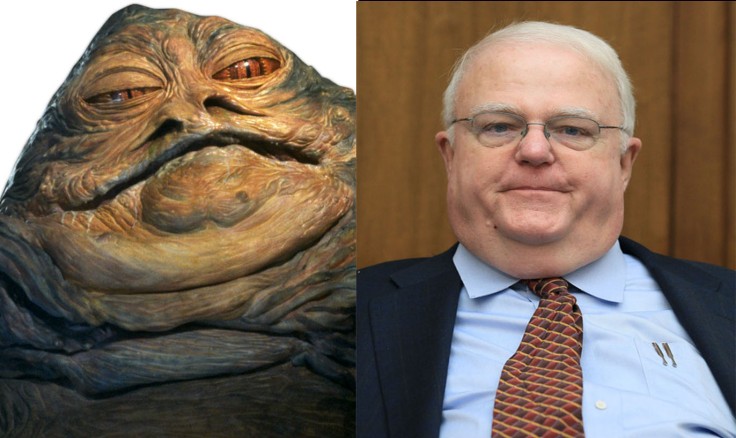 2 thoughts on “Many Lies and One Important Fact: Congressman Sensenbrenner Town Hall”