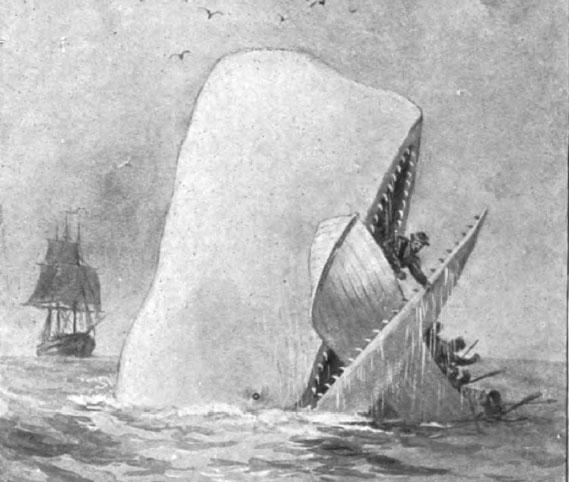 Taking their orders from the Captain Ahabs of industry and organized labor, key Wisconsin Democrats meekly surrendered on the Felony Trespass Bill, making environmental protest illegal. In the meantime, the State’s environment is sinking faster than the Pequod.

What if the protectionism being granted to big oil had been applied to whaling, an industry once essential to the American economy?

In the mid-nineteenth century, whaling was the fifth largest industry in the United States. More than 700 ships sailed out of New England under the American flag, killing thousands of whales annually. The American whaling fleet in 1846 had three times as many ships as the rest of the world combined. New Bedford, Massachusetts was the richest city in the U.S. in per capita income. And whaling contributed $10M annually to the GDP.

Nearly every part of the whale had its own commercial niche. Sperm oil was used to lubricate machines for the industrial revolution. Ambergris was used to light lamps. Baleen, a type of whalebone, was used in corset stays. The whaling industry employed thousands, made fleet owners wealthy, and paid sailors and harpooners good wages that included a share of the profits.

And then, for a variety of reasons, whaling in the U.S. declined. One contributing factor was that whalers from European countries were willing to work for lower wages while deploying the same advanced harpoons and winches invented on American whaling ships.

As the U.S. whaling industry died, fossil fuels boomed. The industry that sent sailors on years-long voyages to the remotest parts of the earth and made a lasting impact on American literature had fewer mourners than Captain Ahab. The economy moved on.

But what if the whaling industry had had its own Koch Brothers?

What if the corporations that owned whaling ships had bought their own senators, paying them through campaign contributions to introduce bills that called for higher taxes on petroleum, making its use prohibitive?

And what if people who tried to object to an industry holding their futures hostage had their First Amendment rights curtailed and were thrown in jail for objecting to it?

It’s a pretty safe bet that there wouldn’t be a whale left anywhere on this planet, and with the loss of one species, many others would have been threatened or joined it in extinction. When people finally ran out of whales to exploit, they would have been scrambling for alternative sources of light and oil, because the technologies that would have replaced whale products would never have been allowed to develop.

Today, government and industry seems to be engaged in exactly that kind of pushback against reality.  Every day brings word of the transformation of the EPA from an industry watchdog to an industry lapdog. Clean air and water regulations are being repealed by the Trump administration as a matter of routine. The USDA, which protected us from the most devastating effects of tainted meat, will no longer be conducting plant inspections. The meat producers are now on the honor system.

In the Amazon, deforestation has turned into a frenzy, and indigenous people who are trying to protect the rainforest are being murdered.

In Australia, extreme heat exacerbates bush fires and rising water temperatures are killing the ancient kelp. The formerly cool waters of the Tasman Sea are now so hot, it’s being called a “fever.”

Everything is burning in India. Last summer, temperatures in southern India rose to 120 degrees fahrenheit. The most polluted nation on Earth, where a majority of its vast rural population still lacks toilets, is addressing its problems by burning more coal and depriving Muslims of citizenship rights.

And while scientists are telling us that we have now exceeded the climate tipping point and have maybe ten years to fix things so that humanity and the planet have a chance of surviving, the Trump brothers make a great show of murdering endangered species and posting the photos on social media. Destroying rare animals is twice the fun if you can piss off liberals at the same time. This while a million species are slated for imminent death due to rising temperatures and declining habitat.

But let’s talk about Wisconsin, where last November, our beloved Republican legislators, along with Democrat fellow-travelers afraid to confront the labor unions, passed what is popularly known as the Felony Trespass Bill. The bill makes it a serious crime, punishable by a $10,00 fine and jail time, to protest on oil company land, at oil company corporate headquarters, or even your own land if the Enbridge Line #5 pipeline happens to run through it.

Governor Evers, under pressure from organized labor, signed the bill into law. Before doing so, he asked for “political cover” from environmental groups – political cover in the form of an outpouring of public sentiment in opposition to the bill. It never came. Evers signed.

AB426/SB386 was based on the “Critical Infrastructure Protection Act,” a model bill put together by the American Legislative Exchange Council, which supplies right-wing legislation to Republican state legislatures nationwide. Similar bills have been proposed in at least nine other states, including Ohio, Indiana, Iowa, Texas, and Idaho. Koch Industries and Americans for Prosperity, one of Koch’s powerful tentacles, have been funders of ALEC since its inception.

In Wisconsin, the bill was supported by the American Petroleum Institute (API), the American Chemistry Council, and the Plumbers and Steamfitters, unions for the workers who build the pipelines, as well as other businesses and associations.

A letter from seventeen of these groups, an amalgamation of industry and labor but more heavily weighted in favor of industry and including the ubiquitous Wisconsin Manufacturers and Commerce and even the Wisconsin Restaurant Association, hand-delivered a letter to Evers that began with the words:

There is no doubt that our state’s economy and families depend on an infrastructure network to move and supply energy and water for transportation, heating homes, powering manufacturing, fueling agriculture and for providing the sustenance for survival. Unfortunately, we are seeing increased efforts by some to sabotage this critical infrastructure and harass the workers we depend on to keep it up and running.

The letter went on to detail acts of vandalism reputedly committed by protestors at the Dakota Access Pipeline, one of the more famous and determined protest movements in recent years, without mentioning it by name. According to the letter, in “recent years, critical infrastructure worksites in the Midwest have seen . . . hydraulic fluid leaked onto the ground due to vandalism,” implying that this has actually occurred in Wisconsin, where it is difficult to imagine indigenous communities leaking toxic chemicals onto their own land, or environmental protesters causing more damage to the land they are desperately trying to protect.

The letter certainly avoided any mention of the longterm consequences to “sustenance and survival” by our continued dependence on oil.

But honestly, do these groups really believe that Wisconsin’s families will no longer have the sustenance they depend on for survival if we shut down Enbridge’s pipeline? Or if we support industries that could contribute to a cleaner energy future instead of the ones that are killing us?

Wisconsin’s rivers and streams are more polluted than they’ve been in decades as environmental laws were repealed and revoked under the Walker administration and Republican dominance in the state legislature. Kohler company continues its plans to plow under a rare wetland to build yet another luxury golf course, plans that will result in poisoning groundwater and endangering the property of local resiedents while at the same time stealing a chunk of state park park from Wisconsin citizens. Residents in Kewaunee County turn on their water taps only to have liquid manure flow out. And Republican legislators at town halls fulminate about how we’ve got laws in this state to protect our land and water while routinely voting to repeal those same laws.

It’s as though twentieth-century holdover industries and right-wing politicians are throwing a party on the decaying corpse of planet Earth. The glee is palpable. To see it, all you have to do is watch one of Trump’s rally speeches. You can’t miss it.

Trump, Koch, Modi, Bolsinaro, Scott Morrison. These are names that will live in infamy, if humanity survives and people retain a concept of infamy. But to that list should be added a group of more local environmental criminals. Fitzgerald, Walker, Strepp, Vos. Time and again, Wisconsin’s leaders have picked short-term business interests over the long-term health of the state’s land and water.

The only way out is to vote, and to vote in such overwhelming numbers that we’re able to drown out the powerful Ahabs, obsessed with their own profit, who are making their stand on the deck of a sinking planet.